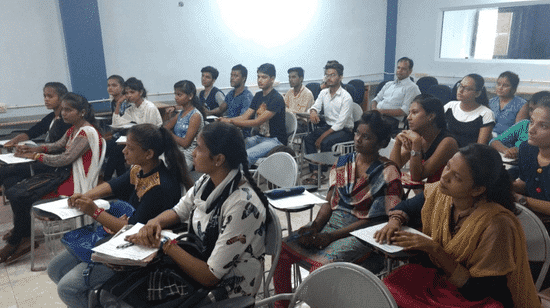 During one of our training mandates with an engineering college in Latur, I met Aniket, a student of mechanical engineering. He was finding it tough to communicate in English despite doing the course from an English medium college. Chatting with him and his batchmates, we realized that students faced a big adjustment issue, as most of them study in the local language (in this case Marathi)  till 10th standard. But when they move into higher education, the medium changes to English. So, they have a double adjustment to make, learn hard skills and also learn/understand a foreign language.

For the last 8 years, my team and I have travelled across 200+ cities like Himmatnagar, Morbi, Shimoga, Hubli, Kanpur, Shravasti, Akola, Palghar, Latur, to name a few. We interacted with youth on their skilling requirement and their career aspirations. During our interactions with the youths of the country we realized that kids aspire to be English proficient/ more polished, but spending their parents’ limited resources in skilling is considered a luxury. That is why the free programs offered under government schemes like PMKVY and CSR projects by the private sector witness huge turnout by youths.

Keeping this in mind, we launched SAKSHAM under which we aim to skill 10,000 youths in 5 years. This program would enable the youth of Bharat to feel connected with the privileged citizens of India as well as foreign countries. Our 1st Program is to skill the underprivileged youth between class 6th and 10th. They may take inspiration from youngsters like Aniket who joined his Mechanical Engineering course in English despite studying in a local Marathi medium school till high school.

Let’s make a difference by taking one child at a time, and help build India into a country of confident youngsters.

I look forward to your wholehearted support at  SAY-U